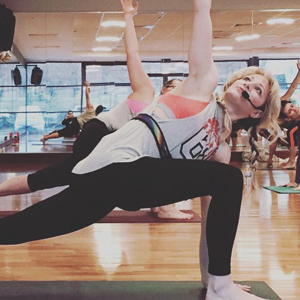 Janine has worked in the fitness industry for over 10 years and is passionate about all things exercise, particularly Les Mills, Pilates and yoga....
Read more

The more active a mother is, the more physically active her child will be, suggests a UK study of 500 mums and four-year-olds. Researchers from Cambridge and Southampton universities used heart-rate monitors to measure activity levels over a seven day period.

554 four-year-olds and their mothers wore a lightweight combined heart-rate monitor and accelerometer on their chests, for up to seven days. Participants were asked to wear this continuously, including while sleeping and doing water-based activities.

The study, published in Pediatrics, the official journal of the American Academy of Pediatrics, suggests that policies to improve children’s health should be directed towards whole families and should seek to engage mothers in particular. The study’s authors concluded that children are not just naturally active, and that parents have an important role to play in developing healthy exercise habits early on in life. Data from mother and child was matched up to see if and how the activity patterns of adults and children correlated.

“We saw a direct, positive association between physical activity in children and their mothers,” said Kathryn Hesketh, who co-led the study. Hesketh is formerly of the University of Cambridge and is now a research associate at the Institute of Child Health at University College London. “The more activity a mother did, the more active her child. Although it is not possible to tell from this study whether active children were making their mothers run around after them, it is likely that activity in one of the pair influences activity in the other.”

For every minute of moderate to vigorous activity a mother engaged in, her child was more likely to engage in 10% more of the same level of activity, the study found. If a mother was one hour less sedentary per day, her child may have spent 10 minutes being less sedentary per day. These small differences may seem trivial but over the course of a month or a year, they could be significant, she added.

The study recognised that once a woman becomes a mother, her activity levels generally fall and may fail to return to previous levels. Factors which influenced a mother’s activity levels included whether she worked or not and whether the child had brothers or sisters.

Researchers found that overall maternal activity levels fell way below recommended physical activity guidelines. Only 53% of mothers engaged in 30 minutes of moderate to vigorous physical activity at least once a week. This lack of activity could then influence their young children, the study concluded.

“There are many competing priorities for new parents and making time to be active may not always be top of their list,” said Hesketh. “However, small increases in maternal activity levels may lead to benefits for mothers and children.”

Current physical activity guidelines recommend that adults should achieve 150 minutes of moderate intensity exercise per week. This is comparable to walking briskly for 30 minutes five days a week. According to the guidelines, children should be active for an hour each day.