Every three minutes, someone in the UK learns that they have diabetes. Diabetes is a lifelong condition that currently affects three million people in the UK: this is equivalent to 4.6 per cent of the UK’s population. Around 90 per cent of the three million sufferers in the UK have Type 2 diabetes, which is commonly caused by a combination of poor diet and a lack of physical activity. There are also an estimated 850,000 people with undiagnosed Type 2 diabetes.

Diabetes is a condition where there is too much glucose in the blood because the body cannot use it properly. This happens because the pancreas does not produce enough (or any) insulin or the insulin the body does produce is unable to work properly. With diabetes, the body is unable to use glucose as fuel and as a result, glucose builds up in the blood. If diabetes is properly managed, people with the condition can live long and healthy lives. However, if the condition is not effectively managed, it can lead to devastating health complications including blindness, amputation, kidney failure, stroke, cardiac failure and early death. 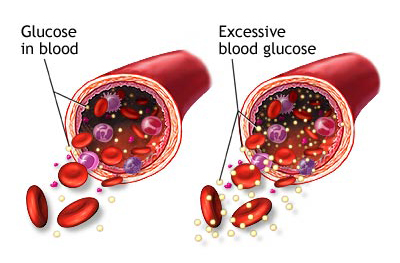 Type 1 diabetes – develops if the body cannot produce any insulin. It can develop at any age but usually appears before the age of 40 and most commonly in childhood. It is the less common of the two types of diabetes. Type 1 diabetes cannot be prevented and it is not known exactly why it develops. It is treated by daily insulin doses by injections or via an insulin pump.

Type 2 diabetes – develops when the body can still make some insulin, but not enough, or when the insulin that is produced does not work properly, this is known as insulin resistance. Type 2 diabetes is treated with a healthy diet and increased physical activity. Medication is also often required and a significant minority of people eventually progress to needing insulin. People are more likely to develop Type 2 diabetes if they are overweight, have a large waist, have a close relative with the condition or are from a black or South Asian background. Being overweight or obese is the biggest risk factor.

Another seven million people could be at high risk of developing diabetes and the numbers are rising dramatically every year. If current trends continue, by 2025, it is estimated that five million people will have diabetes in the UK. Most of these cases will be Type 2 diabetes as a direct result of our ageing population and rapidly rising numbers of overweight and obese people.

There is no cure for diabetes so treatment aims to keep blood glucose levels as normal as possible and to control symptoms to avoid any health problems developing later in life.

There is no cure for diabetes so treatment aims to keep blood glucose levels as normal as possible and to control symptoms to avoid any health problems developing later in life.
If you are worried about developing Type 2 diabetes, there are steps you can take to reduce your risk. Act today by:

* maintaining a healthy weight, or losing weight if you are currently overweight
* eating a healthy, well-balanced diet
* making physical activity a part of your daily life

If you are interested in learning more about diabetes, including how to plan and prepare exercise for diabetic patients, why not take a look at the Level 3 Diploma in Exercise Referral Qualification?