A Guide to Pilates Equipment

Pilates is a popular style of exercise that is performed worldwide by over 12 million people of varying ages, abilities and backgrounds. Once reserved only for elite dancers and Hollywood movie stars, now the Pilates method is practised by everyday people for a variety of different health, fitness and even medical reasons.

Pilates takes its name from its founder, Joseph Pilates, who originally called his revolutionary approach ‘Contrology’. This was, in fact, the title of his pioneering book Return to Life Through Contrology.

There are many different styles of Pilates practised today and the method and its exercises have evolved considerably as anatomical, physiological, kinesiological and medical science have advanced. However, central to all styles and schools of Pilates are the core principles and philosophies taught by Joseph Pilates over 90 years ago.

In this guide, we will take a look at some of the more Pilates studio-specific equipment that are used in Pilates today. Joseph Pilates actually referred to his equipment and designs as ‘apparatus’ and his original designs included the reformer, Cadillac, wunda chair and ladder barrel.

The reformer as we know it today was one of the first pieces of equipment designed by Joseph Pilates while incarcerated as a hospital orderly on the Isle of Man during the First World War. Originally made from an old bed frame and springs, Pilates used the reformer to help people and soldiers recover from the flu pandemic and battle injuries.

The commercial-grade reformer still looks like a wooden bed frame with a sliding carriage. It utilises a spring mechanism to create horizontal resistance and this can then be used to make exercises more or less challenging. Often, the springs have different levels of tension and these can be added and removed to create varying combinations of tension. 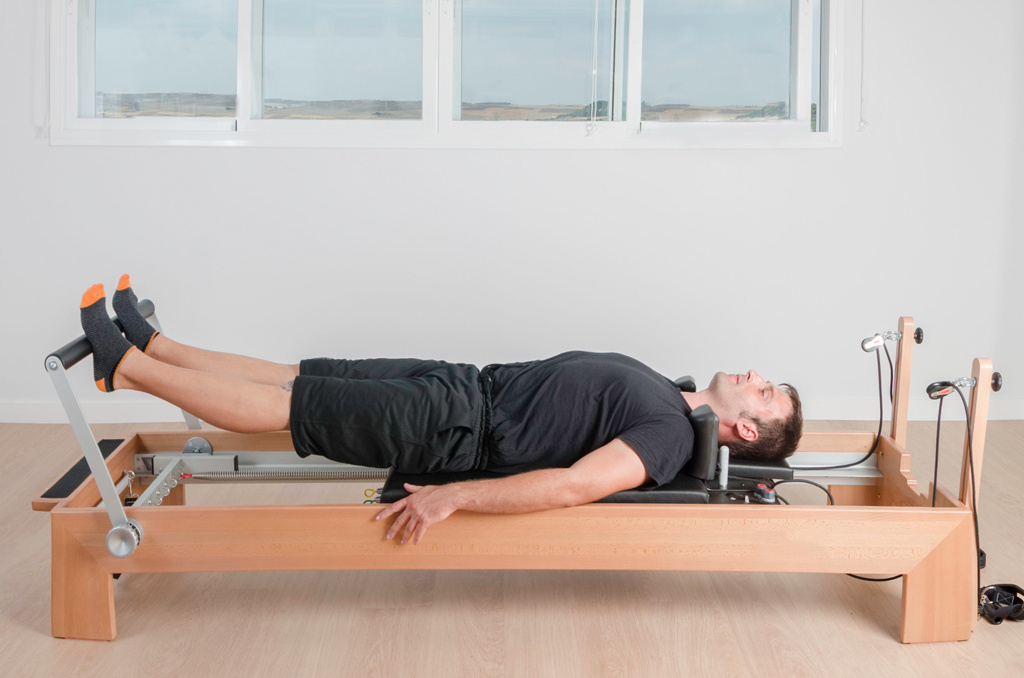 Reformer exercises are often grouped together into sequences or series. The most widely used series include footwork, hip, abdominal, arm, back and spine series. There are also those exercises which can be classified as whole-body because they include a combination of upper, lower and torso integration. 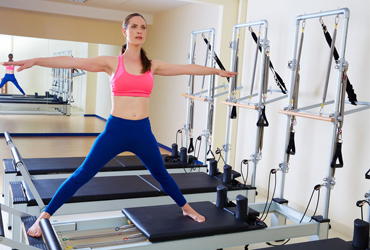 Learn how to master the most recognisable piece of Pilates equipment and elevate your teaching career to new heights with this hands-on, industry-recognised reformer course.

There are over 500 documented reformer exercises with an almost an infinite number of ways to adapt, modify and progress these exercises. Most reformer Pilates courses will teach instructors how to tailor these exercises to the specific needs and abilities of their participants, based on the outcome of a detailed postural and movement screen. Exercises can be performed lying prone (face down), supine (face-up) or side-lying. They can also be performed from a kneeling or standing position. It is this level of versatility which makes the Pilates reformer a highly adaptable and functional piece of studio-apparatus. Most reformer Pilates courses will focus on teaching instructors

The Cadillac is arguably the most visually impressive piece of Pilates equipment and to the untrained eye, may actually be mistaken for a larger reformer. While both pieces of equipment resemble a four-poster bed frame, the Cadillac is usually much larger and doesn’t have the same sliding carriage that the reformer has. Additionally, the Cadillac has a large frame around it, providing support for the various bars and handles that are suspended. In some Pilates circles, the Cadillac may actually be referred to as the ‘trapeze table’.

The name is said to originate from an ‘off the cuff’ remark one of Joseph Pilates students made. As the story goes, when Pilates unveiled his contraption to his students, it’s said that one of them said ‘Hey Joe, is that your new Cadillac?’ and the name stuck. 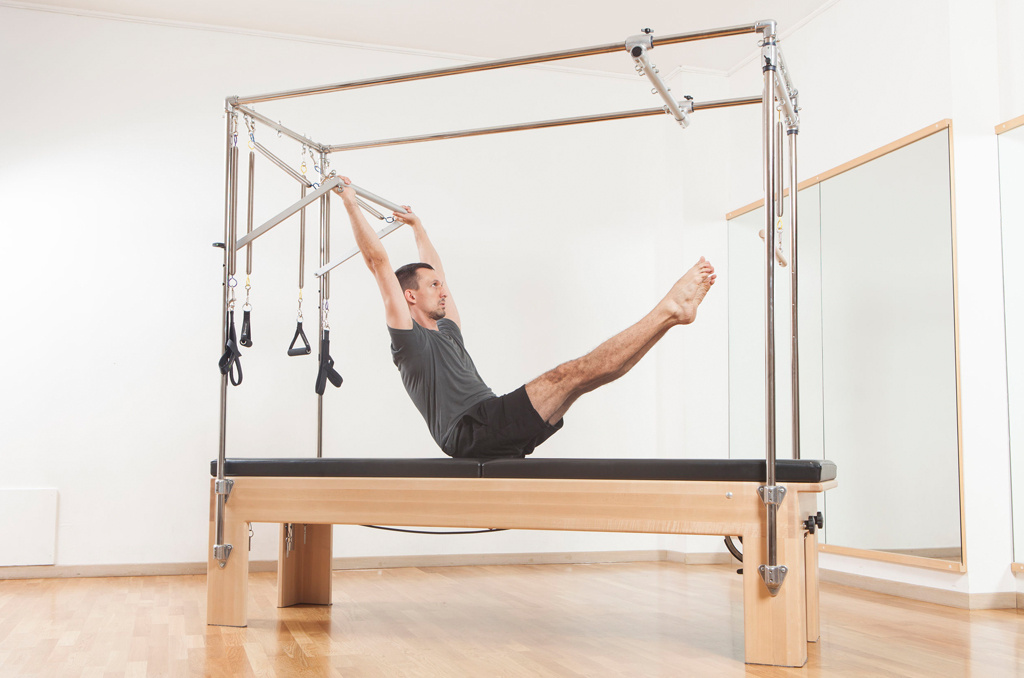 Exercises on the Cadillac are performed from a wide-range of body positions. Some of the most basic exercises resemble those used in Mat Pilates, where the participant lies in a prone, spine or side-lying position. Exercises can also be performed in a kneeling and standing body position. Many of the more advanced exercises resemble those of an acrobat in the circus. The various handles, straps, roll-up bar and push through bar are used to assist or resist the movement, as the exercise and participant requires. There really is an exercise for everyone with the Cadillac.

Like reformer exercises, Cadillac exercises are also performed in a sequence and these sequences may focus on a specific area of the body, or work through the whole-body, depending on the specific needs and abilities of the participant.

The Trapeze is that component of the Cadillac that is suspended from the horizontal bars of the Cadillac. We’ve decided to cover the trapeze separately from the Cadillac to ensure that it gets the attention that it deserves. Many light-duty Cadillacs and reformers have a frame that attaches to them to convert them into a trapeze. However, these do tend to be less stable than a purpose-built Cadillac.

The trapeze is believed to have been inspired and influenced by Joseph Pilates interest in gymnastics, which he got from his father, Heinrich Friedrich Pilates, who was a gymnast.
There are usually two moving mechanisms on a trapeze. The first is the horizontal sliding bar which can be moved forwards and backwards to adjust for different body lengths and positions. This usually has a solid bar suspended from a set of springs and a strap which sits beneath that. The second is the wool straps or handles, which are often referred to as ‘the woollies’. In more modern and contemporary designs, the woollies are replaced with a more durable and hygienic material. 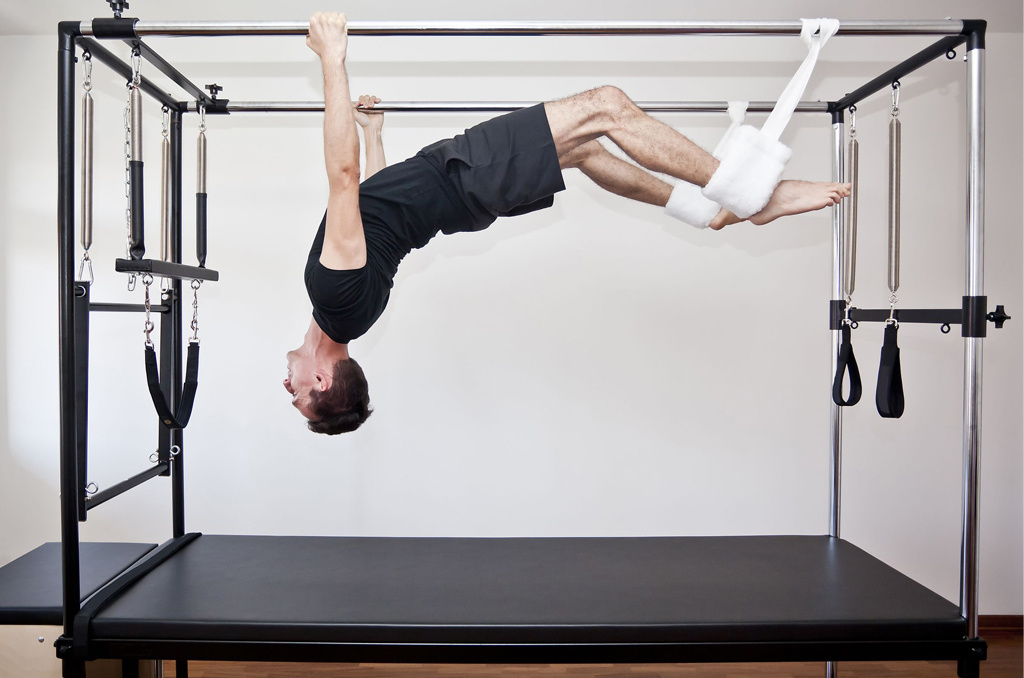 Most trapeze exercises are performed from a suspended or semi-suspended body position. There is also often a degree of inversion (the body being inverted) associated with these exercises. While the suspended springs do provide some assistance with regards to suspended positions, most of these exercises do require a good level of strength.

This piece of apparatus is more often used during one-to-one Pilates sessions and it’s unlikely that you would find it being used in a group Pilates class or session.
As the name suggests, there are two main components to the ladder barrel. The first is the wooden ladder with rungs for either the feet or the hands to connect with. The second is the barrel, which is normally padded and covered in leather for comfort and hygiene. 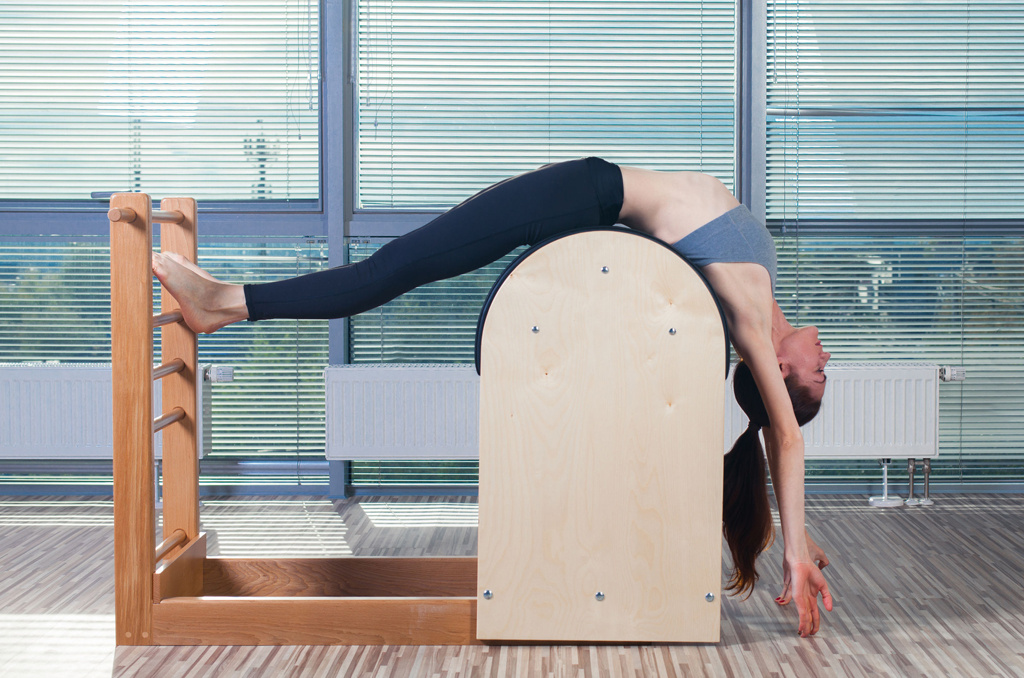 The ladder barrel has many uses and applications but is most often used to target and strengthen the spine extensors, abdominal and oblique muscles. There is also usually some involvement of the hip, leg and shoulder muscles, especially the gluteals.

The ladder barrel can also be effective for stretching and flexibility work because the curved nature of the barrel combined with the stability of the ladder provides an ideal structure to anchor one part of the body while moving another away, as is required for a stretch to occur.

The spine corrector looks by all intents and purposes like a smaller and more compact version of the ladder barrel, owing largely to its dome shape and padded surface. On closer inspection, however, you’ll notice that the curve on the spine corrector is less pronounced than that on the ladder barrel. It also sits much lower to the ground than the barrel. Both of these features make it an ideal piece of apparatus for those new to Pilates, or who have injuries or restrictions which mean that the range of extension at the spine needs to be limited.

They are mostly made from wood and leather (or vinyl), although cheaper variations made from foam also exist. These do tend to be less durable and aesthetically-pleasing than those made with a wooden frame.

The spine corrector is usually only found in a dedicated Pilates studio – it’s unlikely that you’ll find one in a health club. Due to their size and shape, it is possible to stack them on top of each other, making them practical from a storage perspective. This is perhaps the main reason why they are used in both one-to-one and group Pilates sessions. 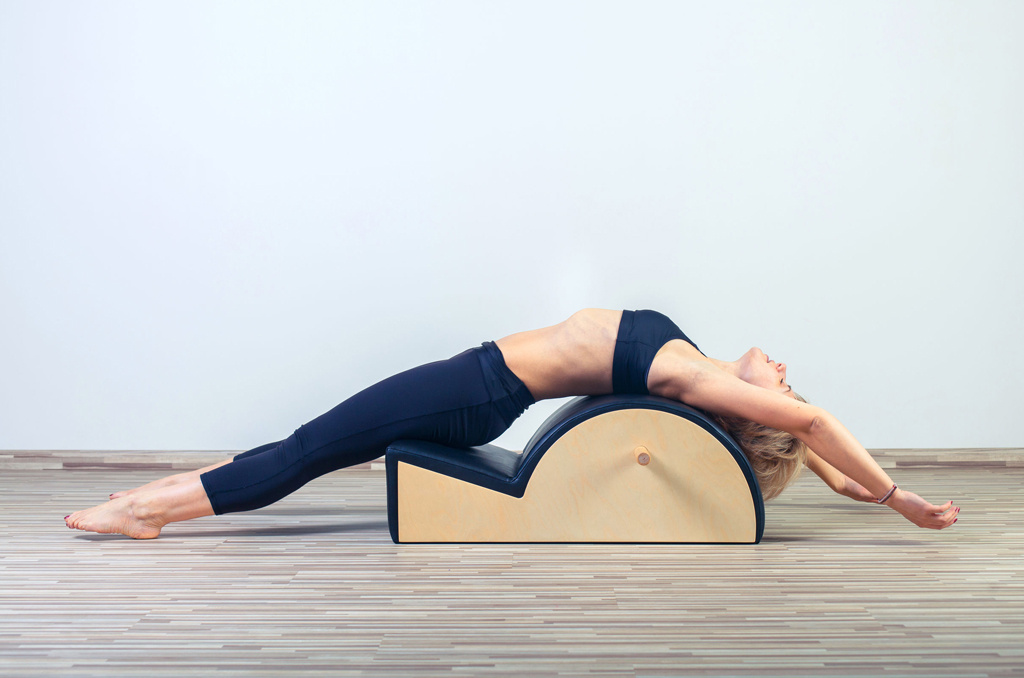 The spine corrector may be used in isolation as the focus or theme of a session, or incorporated into a mat, reformer or Cadillac session for specific exercises. Although it is lightweight and relatively easy to move, it is also quite sturdy because is has a large base of support. It can therefore also be placed on to the carriage of a reformer or the bed of the Cadillac and used to assist exercises on those pieces of equipment (e.g. to provide more extension range during a roll down on the Cadillac).

They are mainly used for stretching and strengthening exercises that focus on the hips, spine and abdominals, although some exercises will naturally have a spillover effect to other areas of the body, especially the neck and shoulders.

And finally, we close with our last and smallest piece of apparatus, the Pilates chair. Originally named the ‘Wunda chair’ by Joseph Pilates, he designed the chair to be a convertible armchair that could quickly and easily be transformed into a functional exercise station. The chair was deliberately compact because it had to be able to fit into a small New York apartment where space was in short supply. The original design only had a seat, pedal and springs, whereas the modern take on the chair now has considerably more features, including handles, split pedals and with some designs, a high back alignment plate.

Like most of the Pilates apparatus, the chair is made from wood and the seat and pedal are usually covered with leather or vinyl padding. The springs attach to the pedal to create resistance in a downwards motion – the springs can normally be adjusted to create more or less tension. The spring mechanisms are somewhat more sophisticated than earlier designs which makes it much easier to vary the resistance on the pedal. 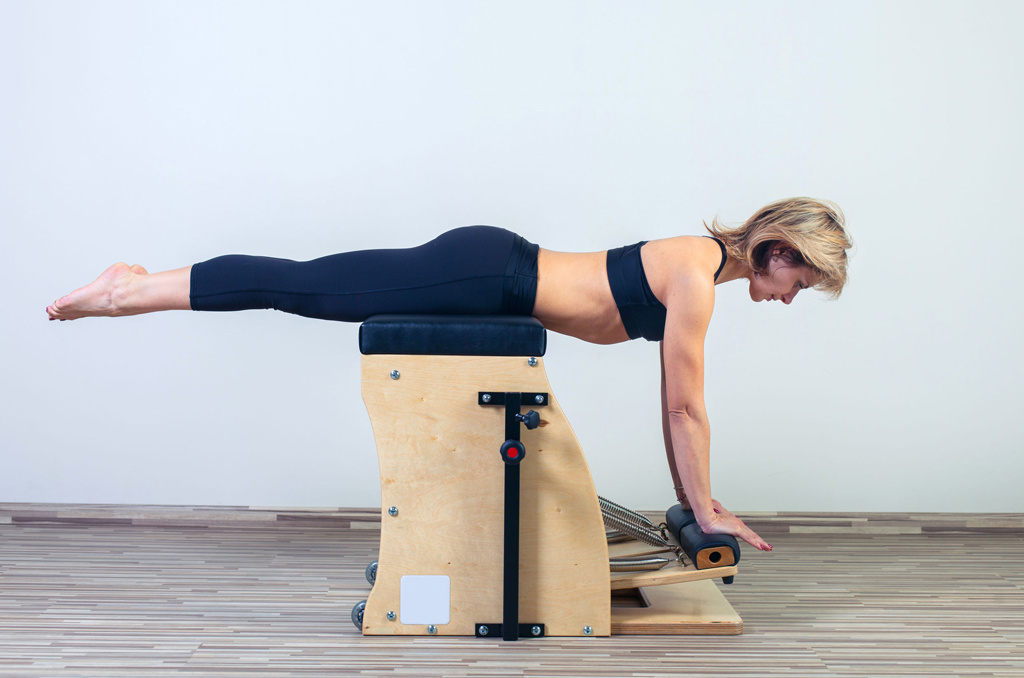 The chair isn’t really used or marketed for use in the home anymore. Nowadays it is only really found in a dedicated Pilates studio. Most studios only have a handful of chairs and so they are typically used in one-to-one and small group sessions only.

Most of the exercises on the Pilates chair are usually performed from a seated or standing position. The more capable Pilates practitioners may also perform exercises from either a prone (the swan) or supine (the teaser) position. The chair has a relatively small surface area, making much of the body in prone, supine or side-lying positions unsupported. This feature makes them really quite advanced! Seated and standing work is usually suited to all abilities.

Lee has over 20 years’ experience in the health and fitness industry and has performed multiple roles, including physical training instructor, strength and conditioning coach, lecturer, writer, tutor, assessor and verifier for vocational qualifications. He has a passion for all things exercise, with his key specialisms being strength and performance-based training....
Read more