The History of the Treadmill

The treadmill is without a doubt one of the most popular pieces of cardiovascular equipment you’re ever likely to find in a gym, health club or leisure centre. While loved and hated in equal measures, for many people who exercise on a regular or even an infrequent basis, it can form an integral part of a workout regime. Part of the reason for this is availability, there are often just more treadmills in a fitness environment than any other type of machine. The barrier to entry is also low and the ease of use is high.

It’s a machine so popular that there is no shortage of group classes centred around treadmills, from the likes of Equinox, 1Rebel and Barry’s Bootcamp to name a few. In America, boutique running studios have begun to pop up from the likes of Incline Running in Philadelphia and Mile High Run Club in New York.

Recent figures have revealed that the global fitness equipment market (including all types of equipment and machinery) currently stands at £7bn and this could reach £11bn by 2022. Reports from the US suggest the treadmill is the single most popular piece of CV equipment currently on the market. So not only is the treadmill immensely popular and widely used, but its sales are causing shifts globally.

It may come as a surprise, but the origins of the treadmill aren’t rooted in any form recreational exercise or sport. In fact, it developed from the world of engineering and construction. Throughout history, the treadmill in most of its iterations has held a strong connection to manual labour.

In the 1st century AD, the Romans used a precursor to the treadmill, known as the treadwheel or polyspaston (Latin for ‘hoisting tackle with pulleys’) crane. This human-powered device was essentially a large wheel attached to a crane. Used in place of a traditional winch, men would walk continuously within a large hamster-like wheel.

The subsequent movement of the wheel would cause the attached crane to lift heavy objects. Due to the diameter of the actual wheel, the lifting capacity of the treadwheel crane was around 60 times more efficient than the purely man-powered construction methods previously used by the Ancient Egyptians to build the pyramids. It truly was a feat of engineering.

While the human-powered treadwheel remained a key piece of machinery right through to the 13th century, the form factor still closely resembled that of a waterwheel.

In the 19th century, horses were placed on treadmills to operate stationary machine when renewable power sources like wind and water weren’t available. In rare instances, horse treadmills were used to power boats, particularly on the east coast of the United States. This iteration of the treadmill featured a horizontal belt that more closely resembles the models we know today. 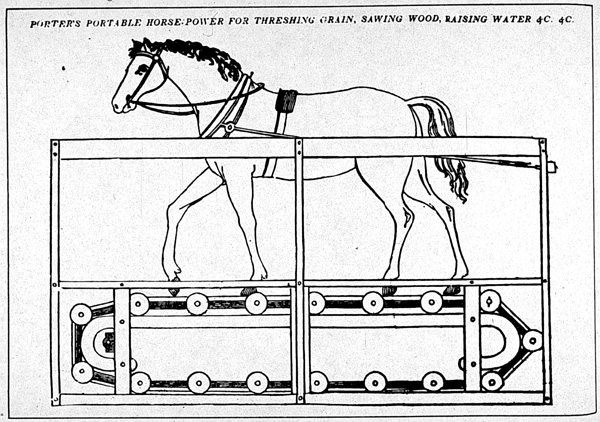 The horse treadmill was then later adapted in the early 1800s for everyday domestic use. Smaller versions for dogs, sheep and goats were fashioned to operate butter churns, grindstones, fanning mills and cream separators.

The next big iteration in treadmill design came in 1817 and it’s perhaps its most notorious application to date. After witnessing the apparent idleness of prisoners in the 19th century, engineer Sir William Cubitt was inspired to create the ‘tread-mill’.

This machine, despite its name, actually more closely resembled a modern-day StairMaster than the treadmill as we know it today. Nevertheless, Sir William saw this new invention as a means to reform offenders by giving them a taste of true work.

These penal tread-mills resembled treadwheels, insofar as they were large wheels. Sir William’s design, instead of having someone operate from the inside, had a series of steps fitted to the outside. Prisoners would essentially cling to hang holds and climb the steps which would turn the wheel. Because the treadmill was self-propelled, providing there was at least one prisoner still climbing, the wheel would continue to move. 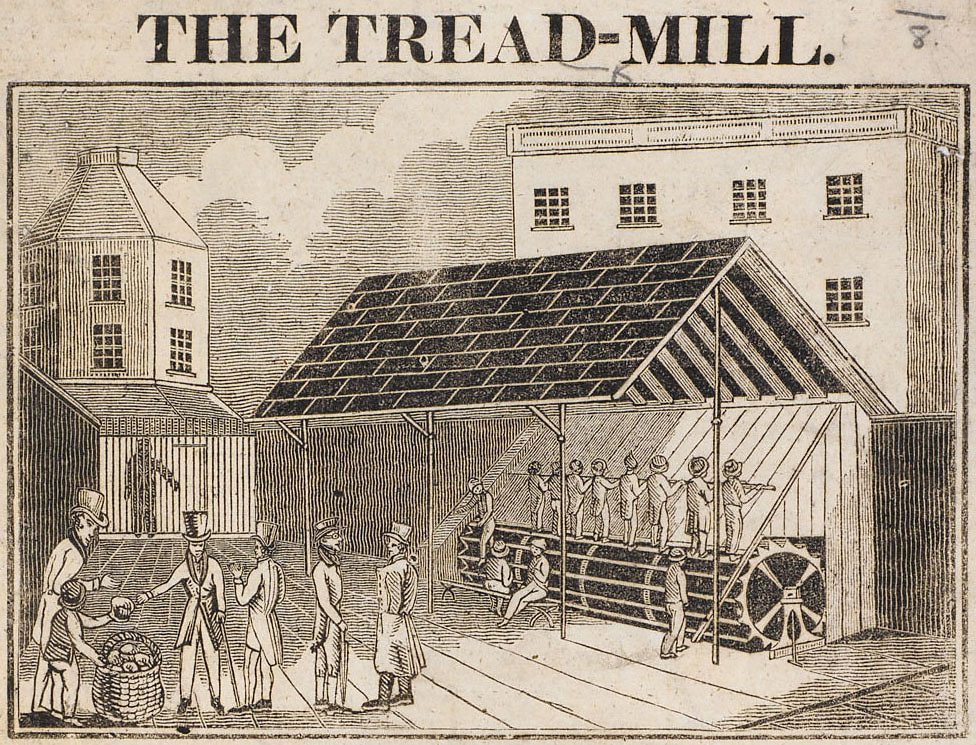 Despite Sir William coming from a family of millwrights, the work prisoners did by operating the tread-mill literally contributed to nothing. While the US very much favoured chain gangs at the time to perform functional manual labour, British prisons simply used the tread-mill to punish and hopefully deter prisoners from re-offending, although the former was the primary function.

Typically, prisoners would walk for about six hours daily, climbing up to 14,000 vertical feet and easily burning more than 2000 calories. One of the longest documented stints was at Warwick Gaol where prisoners climbed a combined 17,000 vertical feet in the space of 10 hours – the equivalent of climbing the Empire State Building 13 times.

Eventually, Sir William went on to design a version of the penal tread-mill that could be used for pumping water and grinding corn, though it still remained an arduous, physically punishing task for prisoners. The tread-mill was eventually abolished in 1902 and with that, the treadmill as we know it today began to slowly take shape.

In 1911, Claude Lauraine Hagen filed a patent in the US for a ‘training-machine’ which featured a treadmill belt. The patent was eventually granted in 1913 and is surprisingly detailed and forward-thinking for the time.

For example, Hagen had envisaged his machine as having the ability to be folded up, allowing it to be easily transported. He accounted for users of varying heights by including movable side rails and even made efforts to reduce the noise the machine would make by attaching four outer posts to essentially raise the belt off the ground – this also allowed the incline to be adjusted. 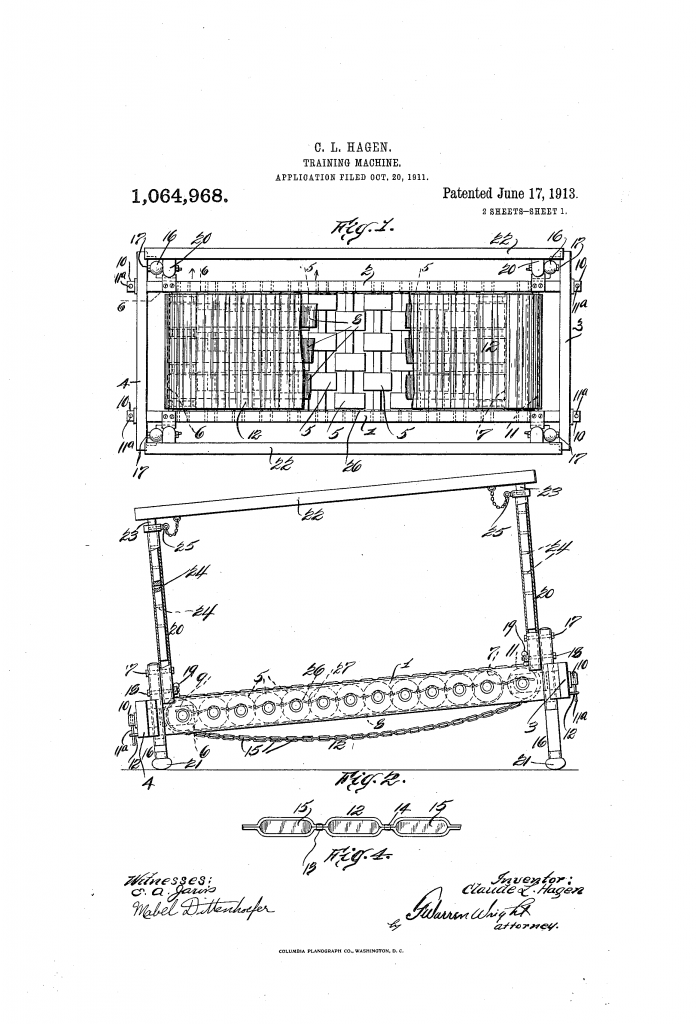 Evidence that Hagen turned this design into a working prototype is hard to come by, however, it is a patent that is still cited to this very day in modern patents and designs for treadmills.

Throughout the 1920s and 30s, models of treadmills came to the fore that were manually operated. They lacked a motor and required the user to manually move the wooden slats to create momentum, vastly different from the continuous rubber belt we’re used to today.

The first motorised treadmill was co-invented by cardiologist Dr Robert A Bruce, dubbed The Father of Exercise Cardiology, in 1952, and was used to diagnose heart and lung conditions and diseases. Dr Bruce achieved this with a cardiac stress test, now known as the Bruce Protocol. Patients were hooked up to an electrocardiograph machine (ECG) while walking and running. Every few minutes the speed and incline would increase allowing Dr Bruce and his research partner Wayne Quinton to see if and where heart and lung defects were taking place.

Prior to this test, patients would be observed via an ECG while lying down, and at rest. Another alternative was the Master’s two-step test. Named after cardiologist Arthur M. Master in 1935, patients would have their ECG readings taken at rest, then another after stepping on and off a small platform. This proved unreliable as many patients found it too difficult a task to even complete. With the accessibility of a treadmill and the ability to accurately control speed and incline, it’s easy to see how the Bruce Protocol became the standard.

Staub built a prototype treadmill, the PaceMaster 600, and sent it to Dr Cooper for approval. Seeing the immense possibility of a treadmill in the home, Dr Cooper pledged to fund the machine through his company Aerobics Inc, which in turn helped Staub find a mass audience. 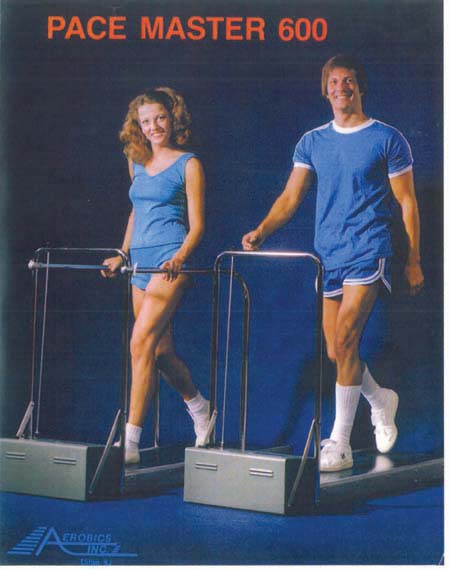 By the 1980s, Aerobics Inc were selling 2,000 treadmills a year and by the mid-90s, sales had reached a momentous 35,000 units a year. Innovations in treadmill technology continued at a steady pace but the focus shifted to comfort and usability.

In 1991, one of the world’s most popular fitness equipment brands, Life Fitness, produced their first treadmill after spending several decades focusing on exercise bikes. The 9500HR featured a patented shock absorption system and despite taking a week to assemble, propelled Life Fitness into a whole new market.

Modern Day Use and a Look to the Future

While the underlying technology of the treadmill hasn’t changed dramatically in recent times, perhaps the biggest advancements have come from extra features. Life Fitness were the first to introduce a touchscreen console to treadmills back in 2003 and later added iPod/iPhone connectivity. Many other leading brands continue to push the envelope regarding integrated technology, with built-in TVs, more seamless smart device connectivity, virtual race experiences and custom exercise plans based on a user’s stride length and cadence.

Today, companies, innovators and researchers seem to be focused on incremental improvements and added features, rather than wholesale changes to the form factor and function of the treadmill.

Researchers at Ohio State University have developed a treadmill that automatically adjusts speed depending on the position of the runner. Using sonar, the treadmill first identifies where on the belt the runner is. Then, if the runner moved forward, the speed would increase. Predictably, if they moved back, the speed would decrease accordingly. With a prototype now finished, associate professor Steven Devor is hoping to take this product to market.

Perhaps at the other end of the innovation scale is Peloton, a home fitness start-up company, who after a significant amount of investment is now worth over $1 billion. Previously, Peloton have released an internet-connected spin bike which retailed for $2,000. At a recent CES (formerly the Consumer Electronics Show), they unveiled their latest creation, the Peloton Tread, a $3,995 treadmill. 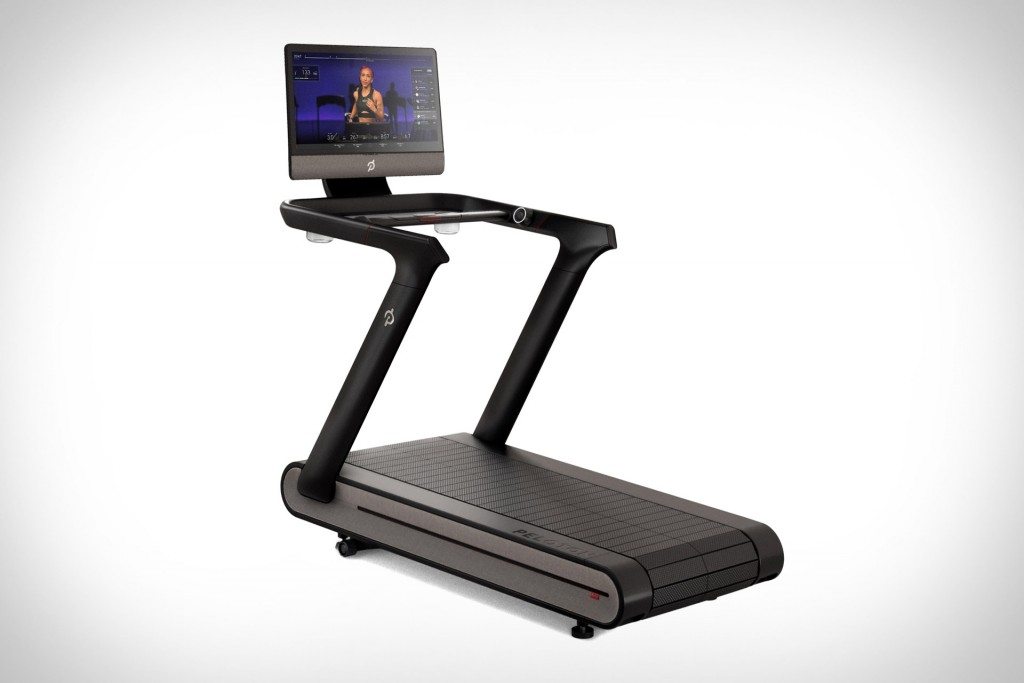 As exorbitant as the price may be, the Tread boasts surround sound, a slat running belt and a 32-inch screen which bears more than a close resemblance to an Apple Mac. The Tread’s hook is that the treadmill is but one component of a full-body workout experience. Guided by bespoke exercise classes streamed to the screen. The exercise participant might begin on the treadmill itself with jogging or sprints and then move to an exercise mat for bodyweight or resistance exercise.

At nearly $4,000, it isn’t designed for mainstream home use, but that’s not to say existing companies couldn’t produce something similar, more affordable and perhaps even better in the future.

From the Roman treadwheel to the penal tread-mill, in some form or another, the treadmill has been around since the 1st century. This gym staple has evolved from a construction tool, a method of punishment, medical apparatus right through to the piece of exercise equipment we all know, love and hate.

Innovations in modern-day treadmills have tended to focus more on quality of life improvements and less on wholesale form factor changes. It’s unclear whether there will ever be any more big design shifts in the future for the treadmill but one thing is certain, the multi-row arrangement of treadmills in gyms and health clubs around the world isn’t likely to change anytime soon.