Cyclical changes in the female body is an area that is receiving increasing attention from both the scientific and sporting communities. There have been a number of studies on the effects of menstruation on exercise performance, measuring everything from endurance to neuromechanics. Research by the American Journal of Clinical Nutrition on energy expenditure during the menstrual cycle found that their subjects experienced an 8-16% increase during the 14-day luteal phase. Another study which measured the endurance of European rowers by monitoring heart rate, power output, oxygen consumption, blood lactate levels and other measures found that sports-specific endurance performance was not influenced by the normal menstrual cycle. It is clear therefore that there is much more we need to learn and understand in this area.

In addition to scientific research, there is also growing anecdotal evidence on both sides of the debate including testimonials from some of the world’s top athletes. The GB national hockey squad now email their coach the dates of their menstrual cycle so the training schedule can be adjusted accordingly. English middle-distance runner Jessica Judd failed to make it to the 800m semi-finals in the 2013 Moscow World Championships as a result of being prescribed norethisterone to delay the onset of her period. On the other side of the argument, long distance runner Paula Radcliffe has spoken about how her period started on the day she was due to run the Chicago marathon in 2002, where she then went on to break the world record. Her attitude is not to let it become a bigger issue than it is.

Scheduling exercise around the menstrual cycle

It is increasingly popular to schedule training programs around these phases, working with the body’s natural rhythms to maximise results.

Estrogen levels peak during the late follicular phase (pre-ovulation). Studies investigating the physiological effect that estrogen has on the body, particularly in respect of sensation, suggest that it may improve pain tolerance and provide muscles with a small degree of protection against trauma and damage. If this is the case, the follicular phase would best be suited to more intense and challenging bouts of exercise, like high intensity interval training.

This issue is disputed however by Swedish research that has demonstrated that estrogen has little influence on pain sensitivity.

For those exercising for weight loss, this could mean that they are likely to expend more energy and lose more weight in the week leading up to their menstrual phase (assuming that their diet is the same). However, the luteal phase is that which is most commonly associated with food cravings and an increased appetite, so a greater level of self-control and discipline may also be required.

Having a raised body temperature can also make intense exercise, which also raises body temperature, feel more uncomfortable than it would at other times. This increased discomfort may lead to premature fatigue or decreased motivation; high intensity workouts may not therefore be well suited to this phase.

During menstruation, women are most likely to experience their lowest motivation for exercise. A study of an Australian Olympic team found that during the premenstrual and menstrual phases 40% of participants experienced irritability, 38% experienced mood swings, 30% experienced fatigue and 28% experienced depression. While menstruation should not be a barrier to exercise (or an excuse for avoiding it) it is important to be aware of the psychological effects that menstruation exerts and its corresponding impact on motivation levels.

Another important consideration is that exercise can help relieve period pain. Exercise releases beta-endorphins which are internal opioids that act like natural morphine. Any aerobic exercise that increases heart rate such as jogging, fast walking, swimming or cycling can be beneficial in reducing pain. Additionally, regular aerobic exercise (at least three times a week for at least 30 minutes a day) can improve symptoms for sufferers of chronic period pain. 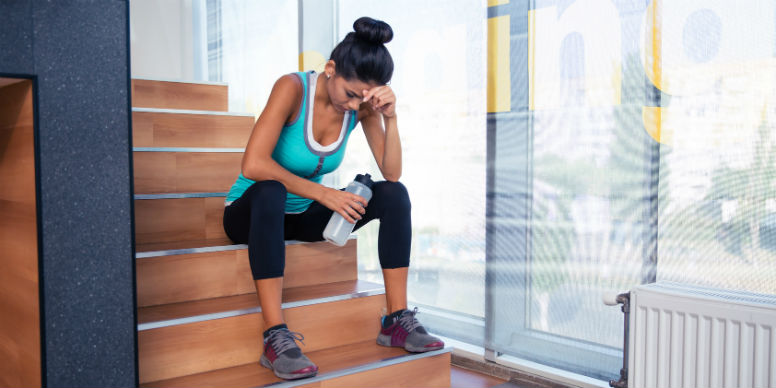 Former British number one tennis player, Anne Keothavong, has been hindered by knee injuries, recovering from two knee surgeries during her career. On both occasions, she sustained ACL injuries during her menstrual phase and she believes that this was a contributing factor. But does the science support this belief?

The BBC reported on a Swedish research study of 319 female football players which found that those women who were not on the contraceptive pill were statistically more injury-prone during their menstrual phase than their counterparts who were not taking the pill. One possible explanation for this increased risk may be related to the higher levels of the hormone ‘relaxin’ that are secreted during menstrual bleeding. This hormone is at its greatest during pregnancy, and primarily serves to relax ligaments in readiness for birth. This is one of the reasons why women in the later stages of pregnancy, and for up to 6 months postpartum, are advised against strenuous exercise and prolonged stretching. In non-pregnant women relaxin levels are significantly lower, but during the menstruation phase of the cycle may still be high enough to exert a relaxing effect on key stabilising ligaments.

There is also evidence to suggest that estrogen present in the contraceptive pill may also impact injury rates. A study by the University of Melbourne on the effects of estrogen on mechanical behaviour of the Achilles heel found that women who were continuously exposed to estrogen from the contraceptive pill had reduced strain in the Achilles tendon. They also found that short term fluctuations in estrogen levels caused by the menstrual cycle in non-pill users did not alter the strain behaviour.

Exceptional circumstances aside, a woman’s menstrual cycle should not interrupt her training schedule and it is debatable whether tailoring a program around it will provide any noticeable change or advantage (except perhaps at the very top level). While there are a lot of studies currently investigating the effects of menstruation on physical performance, the lack of scope and scale of research conducted to date means there is still a lot more to be learned in this area.

That said, being aware of the natural fluctuations of the female exerciser’s body may help exercisers themselves, and fitness professionals better understand how and why performance is affected by menstruation, allowing them to tailor the programme accordingly.