The Principles and Benefits of Chi Running

The principles and benefits of chi running

Chi running is a running technique influenced by both tai chi and yoga and is the brainchild of ultra-marathon runner and tai chi practitioner Danny Dreyer. Since 1999, American Dreyer has been spreading the gospel of chi running to an ever-growing number of runners via books, DVDs, online courses and coaching clinics. Designed to help increase running efficiency while decreasing the risk of injury, chi running is said to teach a more natural running technique that works in sympathy rather than against the laws of physics and nature.

The principles of chi running

Many people run with what can be best described as a very inefficient technique. According to Dreyer, having a vertical body position, pronounced heel strike or a long stride can result in potentially injurious shock being transmitted up through the foot and into the body. In contrast, chi runners use gravity to help drive them forward and favour a shorter, more flat-footed running style which prevents “putting on the brakes”.

The combination of running tall with a forward lean, striking the ground with the mid-foot, keeping a level pelvis and staying relaxed creates a natural running style that reduces injury risk and increases running performance. This form of running is nothing new; Dreyer notes that children naturally run this way and running barefoot also tends to result in less heel strike, lighter footfalls and a more economical running style. 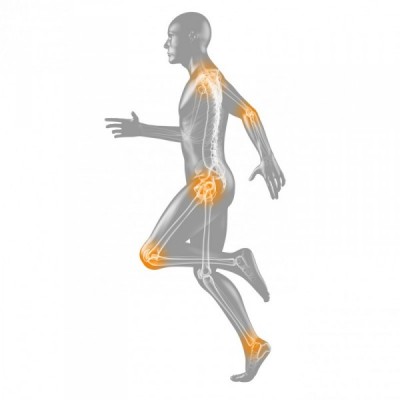 The benefits of chi running

By and large, running is a healthful pursuit that benefits the cardiovascular, muscular and skeletal systems but some runners are frequently or even constantly injured because of the stress that running places on their bodies. Each footfall produces a large amount of force which is transmitted up through the foot and into the knees, hips and lower back.

Chi running reduces impact which has the potential to significantly reduce impact-related running injuries – both chronic and acute. Reducing potentially injurious impact means that runners should experience fewer injuries and be able to run further and faster as well as enjoying longer running careers.

With its focus on posture and core strength, chi running is also a good technique for the problems commonly caused by spending inordinate amounts of time sat down i.e. hyperkyphosis, hyperlordosis, weak core muscles and tight hip flexors – all of which can contribute to back and neck pain.

Most of the beneficial claims about chi running come from either anecdotal sources, from Dreyer himself or other parties with vested interests in this type of activity – New Balance, for example, have produced running shoes designed specifically for a midfoot strike. There are, however, a few independent studies regarding chi running.

In one study published by the Journal of Orthopaedic & Sports Physical Therapy (A Comparison of Negative Joint Work and Vertical Ground Reaction Force Loading Rates in Chi Runners and Rearfoot-Striking Runners), researchers reported that while chi running does decrease loading of the knees and hips, it increases the loading on the ankle. While this might be good news for knee pain sufferers, it suggests that chi running might be problematic for those suffering from ankle pain.[1]

In “A Novel Running Mechanic’s Class Changes Kinematics but not Running Economy”, published in The Journal of Strength and Conditioning, researchers reported that while chi running did reduce impact, it did little for running economy.[2]

How to get started

Because chi running is an acquired technique, runners will need time to learn how to do it properly. This is best achieved by dedicating time to practice – say one or two sessions per week. During these practice sessions, runners should focus on…

Runners wishing to try chi running for themselves should initially understand that changes in running style can take a long time to master and that hands-on coaching will produce the fastest changes in technique. However, the basics on chi running can be learnt by studying online videos, DVDs and books. It is important not to try and change running technique overnight but, instead, try and make small changes over an extended period of time.

Reference 1: The Journal of Strength and Conditioning Research