Could you briefly introduce yourselves and outline how you work with your clients?

Cliff: My name’s Cliff Wilde, one half of Wilde Performance. We run a company that helps people go from confused, lost and medicated to a place of clarity, that’s the easiest way to put it. We basically help people feel much better than when they turned up at our door.

Marta: And I’m Marta, the other half of Wilde Performance. How would I describe what we do? I don’t want to use the word holistic, because a lot of people still associate that word with lighting candles and waving feathers… and while there’s nothing wrong with it that, that’s not what we do. We look at the entire body, the entire life of a person and the complete circumstances that surround a person in order to help them achieve optimum health.

You’ve both had incredible personal journeys, could you just summarise the health challenges you’ve faced and how you both overcame them?

Marta: From very early on in my life I’ve had health issues. Looking back, it was probably undiagnosed IBS (irritable bowel syndrome). I had a lot of issues with cramps and everything to do with gut discomfort. Those symptoms spiralled into a lot of antibiotics. Later in my life when I was a teenager and then in my early 20s, I came to understand that all of those symptoms were linked to my depression and panic attacks. It was just a never-ending cycle of having issues and then going on antibiotics, then through one our mentors I actually discovered that I had a parasite. After I discovered that, back in 2009, I decided to retrain and enter the health and fitness industry, originally as a personal trainer and then moving into nutritional therapy. All that helped me to understand that I had to look at my life and start to rebuild things from the ground up.

Cliff: My story is much more on the physiology side, while Marta’s is more to do with psychology. I was born with a severe dysfunction in my spine that, if left untreated, would have seen me end up in a wheelchair, so over the course of 18 months after I was born I had three major operations on my spine. I was in hospital for over a year and they ended up double-fusing my spine and that resulted in me having a 64 degree curve. That made me lose 6 inches in height, so people look at me and think I’m 5 ft tall, but internally I’m 5 ft 6, so I’m actually taller than Marta even though we look the same. I went through quite a bit of pain in my back when I was growing, but getting into the gym and weight training actually helped stablise those muscles around my spine and I’ve been pain free for years now.

The next thing I had aged 15 was an autoimmune disease called ulcerative colitis. Doctors told me I’d be on meditation for life, or I’d have to have the infected area, a piece of the large intestine removed, but I sit here now free from medication for 7 years. So what they said wasn’t true, but they can only tell you what they know. At 17, I was then diagnosed with a brain tumour that led to meningitis as a result of operation not going right. Those were the major events across my first 18 years and those are the main reasons why I ended up in the job I am now.

While you deal with a lot of complex physical and emotional problems, are they any common approaches you find you turn to with clients?

Marta: To be honest, a lot of people that come to us have very specific problems, because that’s what we’re well known for. So they come with a specific health issue and they have a deep belief that something can be done, but don’t know how to do it themselves.

In terms of our approaches, alongside looking at the physical body we also look at the mind, together with the diseases, issues and illnesses people come to us with. We also deal with labelling and identity issues. So if someone has thyroid problems they usually end up labelling and identifying closely with that issue. It doesn’t matter what they to come us with, there’s usually a strong identity attached to it because of the time they’ve spent suffering with these issues. So unless we shed that mental identify alongside the physical symptoms, issues will keep occurring.

Do you have any advice for fitness professionals looking to deliver programmes online, whether that’s exercise or nutrition-focused? What would they need to do to ensure they’re providing a comprehensive service for clients?

Cliff: For us we’ve built a fairly large online business just doing what we do. The thing we always say to people is ‘value’. The one thing over and above anything else, the one thing people will remember, is how you made them feel.

The person who’s coming to you really doesn’t care what’s in the programme, what books they get or anything like that – all they care about is that they come to you feeling a certain way and they want to feel better. Whether their perceived result is whether that’s weight loss, change in symptoms, feeling happier… whatever it is that’s all they care about. That comes through as a demonstration of value.

One of the things you see online from all the marketers is, ‘give them a free report’, ‘send them an email sequence’ – all that kind of stuff treats people like statistics. People feed off your energy when you speak to them. I spoke to a woman and her little girl who are going to come on one of our courses and she just said ‘no one has ever listened like you’ve listened to me’. That’s what people are crying out for. We all talk too much and don’t listen enough.

Considering the success you’ve had delivering your programmes, and the remarkable changes your clients have seen, why do you think more fitness professionals aren’t leaning more into nutrition to help clients achieve their goals? Is it down to a lack of knowledge, or perhaps something else?

Marta: I guess it really varies. We have people in the fitness world coming to us for advice, not necessarily as clients, but wanting to help themselves so they can help others. The guys that come to us are hungry to know more. It’s all good and well having the qualifications to be a personal trainer or be a nutritional therapist, but it’s the hands on work with clients that goes over and above anything you’d learn doing a course.

Going back to the original question, why don’t more people do it? I think it comes down to belief, a lack of belief. A lack of belief that they are good enough to help clients. Most of the guys we talk to, whether their trainers or therapists or anything, they get stuck comparing themselves to others. You can treat comparison in two ways, you can either say it’s a curable joy or you can look at it as destructive because you always look at others and think ‘I’m not good enough to go out there and make a difference’.

I had someone reach out to us last month saying they had an ebook and they’re getting people to download it but they aren’t getting people to sign up for an online consultation. So it’s nothing to do with the ebook itself or the process, I asked how they felt booking clients and whether or not they were afraid they won’t have anything to say if they did secure a consultation. They said ‘oh, no one’s ever really spoken to me about that’. It’s important to have a strategy and a plan in place, but you need that belief in yourself, your self-worth and what you can do for the world. It doesn’t matter what tactics you use, if you don’t have that belief in yourself then it isn’t going to work.

Cliff: For us one of the biggest things is that we have several free groups on Facebook. We openly tell everyone everything we do. There are enough people in the world that need help and there are not enough people doing the job to help that amount of people. It’s like I tell people if they worry about competition: if you or I or Marta were all standing next to each other and we all had the exact same script and that all could equally impact someone’s life then the energy you give off will naturally pull that person, that client, to one of us and not all three of us – that’s just how it is.

People take it as a judgement and ask why that client didn’t come and train with me. That’s just how things are and that’s why Marta and I are so open and share everything.

We’ve just taken someone onto one of our programmes, she’s a coach, she does functional medicine, a bit of everything, and she’s seen how quickly our business has grown. We said to her, come along and not we will answer any questions you have but we’ll also give you an inside look into how we do everything and you’ll have complete transparency. There’s so much space for it, you can reach the whole world online and there’s no excuse why we can’t all be helping more people. 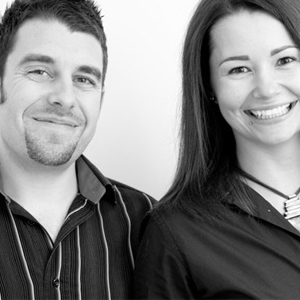 Cliff and Marta are leading online health consultants who regularly help clients with a range of complex physical and emotional problems....
Read more