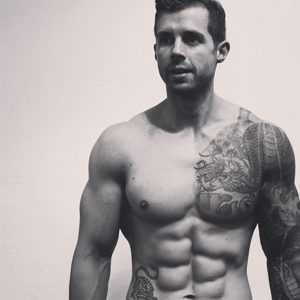 David Kingsbury is a leading personal trainer to the film industry and some of his big-name clients have included Ryan Reynolds, Jake Gyllenhaal, Jennifer Lawrence, Michael Fassbender and none other than Wolverine himself, Hugh Jackman....
Read more

The Long Road to Success – Part 1

Let’s start from the beginning, what initially brought you to the world of health and fitness? How and where did your journey begin?

As I began to take my own sports slightly less seriously I started to want to help people achieve their best results and meet their goals. That was the initial thing that pushed me towards working with other people. I should also say that I’m from a family of fitness people. My dad and my grandad were into exercise science and fitness and they actually helped developed some fitness testing equipment for British Cycling in the 80s. I’ve been around the technical side of fitness forever.

Fitness is a job you can love and be passionate about. You can be successful doing it but if you’re looking to make all your cash and get out, it may not be the best career path. There’s still huge potential to be massively successful but the huge benefit to working in fitness is that, if you’re like me and so many other people, you’re going to love going to work on a Monday morning. That’s the important thing, I’m buzzing to go work on a Sunday night. I’m motivated and excited to see what the next week of work will bring me.

You’ve trained some big A-list names, I’m sure there are a lot of people wondering how did it all come about?

There are very few people doing this sort of thing and every single person who does the same thing as me or slightly similar will have had a very different route in because there’s no set path. Some people may have got here by chance – they’ve been working in a gym that an actor just happened to walk into.

I was in a private studio and one of the guys that trained there worked at Pinewood Studios. He knew I was very motivated and I’d spoken to him before about opening my own studio. I had no plans to run a traditional business, I didn’t mind where I was at and in fact, I still don’t mind where I’m at. That was the main thing. He said that he could put me in touch with the property department at Pinewood and potentially find me a small space on-site where I could run personal training. I phoned them up and they had an old storage room which was part of the old house.

At Pinewood, they have the sound stages and the new studios but at the heart of it is still this old country house that’s been expanded around. There was an old squash court that had been converted for two floors of storage. I’d essentially got the top floor and I could just about afford the rent. It was very daunting at first because I’d never done anything like that myself or by myself.

I’d played around with other businesses before, there was a point where I was buying bicycle parts, building bikes and selling them, but it was my first personal training business venture. I was very fortunate because one of the big film productions are the time was selling off a bunch of gym equipment at a very reasonable price – it was all the gym equipment from one of the Bond films in fact. I didn’t put in a huge amount of equipment because I didn’t feel it was needed, I just had a squat rack, dumbbells, that sort of stuff.

So that was me on-site, in the gates at Pinewood and from there the journey progressed. I was training anyone and everyone who worked at the studio. Everyone from the costume department to accountants, riggers and carpenters. There are so many tradespeople and businesses at Pinewood so plenty of opportunities to work with people. After a few years, my reputation started to build and there were a few potential film job offers that were put to me. I didn’t get the first few because they were looking for someone who had experience training actors.

Eventually I did land one and that was my first step into this line of work. It took a long time to build up to that, I went to a lot of interviews I never heard back from. I would present training plans for actors for huge films and they’d say no. There were a lot of setbacks but I was persistent and I kept working away and kept doing what I was doing and that led to my first opportunity. It was worth it in the end.

How different is a training plan for an actor to compared to ‘regular’ clients?

You train people in very much the same way, or very similar ways. The main difference is the intensity and the amount of time you have with the person. Most people training clients in the gym might train them once, twice, three times a week. With an actor, you’re with that person all day, every day. So if you want to train twice a day you can do that, if you want to train six days a week you can do that. The planning has to be a bit more detailed and more technical because you could be doing more training.

A key difference is the goal. There are generally very specific goals. It might be that they’re shooting a shirtless scene in three months and that’s the absolute deadline. When you’re working with regular clients, unless they’re sportspeople, the deadlines and goals can be a little bit more flexible.

In general those are the key differences, but essentially you do train the same, you’d work through the same training plan, it’s more in the execution. The actor will have a personal trainer with them all the time, they may even have a private chef with them cooking their meals. Someone who doesn’t have those resources is going to have to be a little more self-sufficient with it.