The Press Up Test

The press-up test has been used as a crude measure of muscular strength and endurance (MSE) for many years and it’s particularly popular in the uniformed services, including the military, police, fire, and prison service as part of a wider assessment of fitness. In this article, we’ll dissect the pros and cons of the press-up test, including how to perform the assessment correctly.

Maximum muscular force and muscular endurance are both essential components of overall muscle strength. Maximum muscular force is defined as the maximum amount of force a muscle (or group of muscles) can produce during a single contraction. For example, a world’s strongest man competitor, pulling a 22-tonne plane down a runway, is considered to have a very high level of maximal muscular force.

Muscular endurance on the other hand is defined as a muscles (or group of muscles) ability to perform multiple contractions over a given period of time. For example, a rock climber scaling a 6000m mountain, is considered to have a very high level of muscular endurance.

However, not everybody has access to appropriate equipment or even sufficient knowledge on how to perform a strength assessment. This is where the press up comes in. 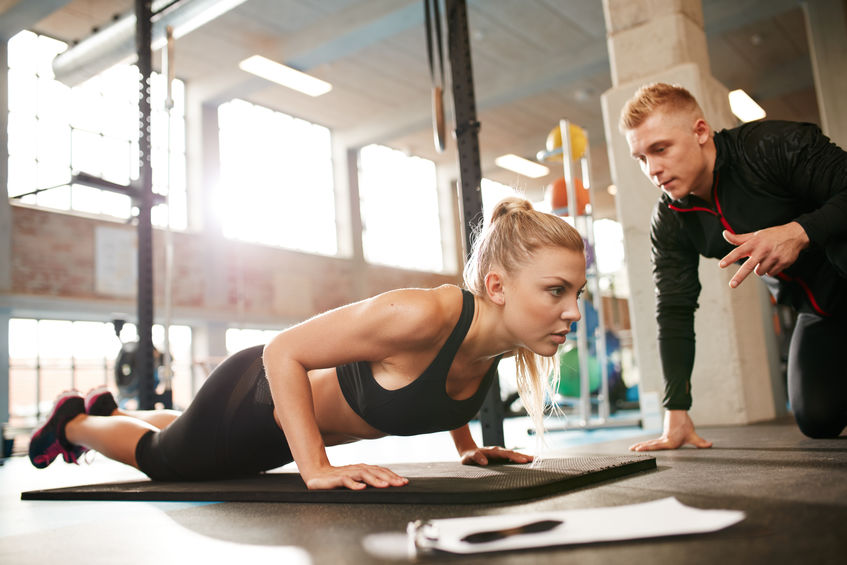 What is a Press Up?

The press up (also known as the push-up) is one of the most widely recognised exercises in the world. A press up generally involves lowering oneself toward the ground and then lifting oneself off the ground.

Mastery of one’s own bodyweight is considered a good achievement in most athletic circles. Through performing this simple action at least once, the ability of the upper body musculature to produce sufficient force to lower/ lift one’s own bodyweight is assessed. By performing as many consecutive repetitions as possible (at a constant bodyweight) within a set amount of time, it is also possible to assess muscular endurance.

Assessing Press Ups Performed in One Minute (How To)

1. Begin in a standard press up starting position as follows:

The modified starting position is similar except:

2. From either starting position (modified or standard) the body is then lowered to the ground with elbow flexion, shoulder retraction, and shoulder abduction. The body should be lowered until the elbow is flexed to 90° or the upper portion of both arms is parallel to the ground

3. From this bottom position the body should then be lifted off the ground by pushing the floor away, using elbow extension, shoulder protraction, and shoulder adduction. The body should return to the starting position (arms fully extended) to complete the movement

4. Throughout the lowering and lifting phases an appropriate press up position needs to be maintained throughout the rest of the body (straight body and lower back)

5. Repetitions should generally be performed continuously but short pauses within the time are permitted

6. Repeat this action with good form as many times as possible in a 60 second time period

All such factors should ideally be kept the same between assessments.

Classification of Press Up Performance

Age and gender are the primary factors that should be considered for press up performance classification.

Therefore, it may be prudent for some women (as well as some men), to begin with these modifications and build up to a more standard press-up position should strength improve over time.

Important note: Certain individuals (e.g., hypertensive patients) may require appropriate supervision when performing this assessment. Furthermore, the press up assessment should be used as an initial screening tool. Diagnosis of low muscle strength or any specific condition (sarcopenia etc) should only be made by a suitably trained medical professional, following suitably validated assessments.