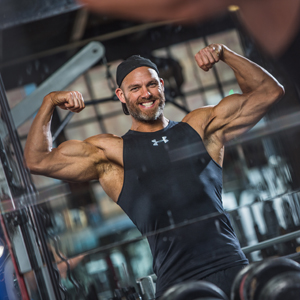 James Crossley initially rose to fame as Hunter on the hit TV show Gladiators, but even before that, he had been competing in bodybuilding competitions since he was 15 years old. He currently runs personal training company Chelsea Fitness with fellow Gladiator Ace (Warren Furman)....
Read more

At just age 19 you were the youngest UK Gladiator, how did this come about and what was it like transitioning from the world of bodybuilding to primetime TV?

I was in a magazine called Bodybuilding Monthly and they compared me to Tarzan actor (and Olympian) Johnny Weissmuller, this caught the attention of the Gladiators producers. They contacted the magazine and said they liked to meet me, can that be set up. They then came to see me at another bodybuilding show which was two weeks later and said ‘we really like your look, we really like your height, would you like to come down next week to audition for the show?’

So I came to London, which was this big audition involving climbing ropes, sprinting, muscle-ups, fighting with sticks… straight away they said ‘yes, we’d like to use you, we’re going to take you to LWT (London Weekend Television) to meet all the other Gladiators’. This was year two, so it had already been on, and I walked into the room with Jet, Shadow, Warrior, all these legends, and that’s how I got on the show.

I already had a job which I had to leave because they couldn’t give me the time off. After that, it was very difficult because I’d never done anything traditionally athletic before, though I did start lifting weights at 12 years old. I’d watched Gladiators, the first year, and thought at the time I’m rubbish at everything. I was so upset because I always wanted to be the best at everything I ever did, so I tried things that mimicked the events of the show.

The thing was we didn’t get much rehearsal time, we had just two days to learn 16 events. It wasn’t like we were doing it every week because we filmed the whole series in two and a half weeks. So unless you did something in your own time you would never get better. I joined a climbing wall, I was pushing cars around a car park, tying my feet together and boxing to mimic the Duel, gymnastic rings to mimic Hang Tough… I’d find some way to mimic each event.

The events were so specific, it didn’t matter if you’re a marathon runner or whatever. When the contestants came through they had very difficult physical tests to get through and the events leant themselves to the gymnasts or the bodyweight people. Again, it doesn’t matter what type of sports discipline you were involved with, we had Olympic bob sleighers on there, all these different people, but unless you’ve actually put the time in to try the events, you won’t succeed.

I mean the Pendulum, for example, being 40ft in the air and upside down. Unless you’ve got some climbing experience under your belt that thing’s just going to feel impossible. Having that extra training was really important. It was never about all the showbiz and glamour of the show, it was about being number one in the competition, that’s always been my thing.

After nearly a decade on the show, what are some of your most memorable Gladiator moments?

We went to Australia and we did some shows out there that were just amazing, it was an Ashes series. When Gladiators finished here, I knew South Africa still had the show going so I got in touch with their producer and said I’d be quite keen to come out there and do some travelling and do a couple of shows. He came back to me and said ‘can you bring some friends?’.

I ended up taking over 12 Gladiators and 12 contestants, nothing to do with the UK series or anything! We went out there and they didn’t have much money to pay us because of the state of the economy at the time, but they paid us instead by putting on trips. So we started off in the Sun City luxury resort and then we went to Kruger National Park to see all the animals. We went wine tasting and then three of us stayed on and went to Zimbabwe, did white water rafting and bungee jumps – so much stuff, it was such an amazing experience because in life it’s all about experiences. That was one of the big highlights.

You’ve done a lot of acting post-Gladiators, what prompted the decision to move into fitness?

With acting, a lot of work was with tours and I did some amazing jobs. I was with the Peter Hall company on an America tour. We visited LA, New York, San Franciso and then I came back to the UK. It’s just very different money over there, a different way of living. It’s a very destructive life touring because you’re in a random place, with random people, you do a show at night and you’ve all day just kicking around. I just said to myself, after 7 years if I haven’t cracked into TV then I’m just going to stop.

I remember it clear as day, I was on my 20th panto and I was sat there somewhere in Liverpool, I thought I’ve given it a good crack but that’s it. I’ve worked with so many actors who were much older and didn’t make it, and I just thought it wasn’t a lifestyle for me.

I do get asked to the odd bit, I do actually have an acting agent. She gets quite frustrated with me because I never actually go up for anything. I’ve got other fingers in other pies so if the right job came up, I would be interested it but not really in touring again. I did two and a half year’s training. I got quite obsessed with becoming really good at it. There’s quite a shortage of bigger actors in England so that was kind of a unique selling point for me. I had some amazing experiences, particularly in America, but it wasn’t for me in the end.

Fitness has always been an underlying thing throughout my life. I’ve always enjoyed it, especially right now with the Fitat40 campaign. We’re getting the point across about how the body changes as you age and I do write for a lot of magazines as well. I don’t do a lot of one-to-one stuff, it’s more about educating people on the importance of fitness and getting the message out there to a wider audience.

Tell us more about the #Fitat40 campaign, what were the motivations behind launching it and what can we expect to see in the future?

What we’re trying to show is the difference between an over 40 body and under 40 body. That’s basically the mobility issues, the posture issues and obviously, people can’t eat as much as they get older, they can’t get away with as much either. There’s a lot of publicity for younger peoples’ training, a lot of role models, but 40 is still a good age. You can still pack muscle on, you can still get lean, you just have to approach it in a slightly different way than if you were 25. I think it’s quite important to get that message across.

Being 42 myself and having trained through all these generations, I’ve had to alter my training accordingly. I mean I’ve dislocated my shoulder 6 times. You can still train really hard but you have to embrace the rest periods and not just be gung-ho. Sleep and recovery are really important, mobility’s really important, the over 40 body is completely different compared to someone younger really.

We’re becoming more educated on topics such as testosterone and other things. As scientists discover new things, we’ll soon be seeing people in their 40s being as fit as people in their 20s. It’s just a case of getting on top of it. If you’re starting from scratch at 40 you can still get yourself in decent shape and not only that you’re extending your life.

Do you have any advice for aspiring fitness professionals looking to launch their career? Is there an area, in particular, they should be focusing on in order to be successful?

For example, myself, I specialise in fat loss, muscle gain and strength, that’s it. If someone comes to me with an injury, I’ll refer them to somebody else. If they want an ante or postnatal specialist, I’ll refer them to somebody else better equipped. I think it’s really important to stay solid on that because you’ll build up bigger respect if you’re really good at what you do rather than being a jack of all trades. Once you start building up a client base and word of mouth spreads that you’re very good at what you do, that’s an easier way to run a business rather than trying to grab anyone you can to train.